When I was researching for Bank 4.0 and Augmented, I discovered something that tied together all of the most disruptive technologies of the last few hundred years – from the printing press, steam machine, automobile and computer. The most disruptive innovations all were big changes in thinking – revolutionary ideas that challenged the status quo. It turns out that what they all had in common was first principles design thinking.

Let me illustrate with a few more modern examples.

While the cost of launching commercial payloads into space has decreased by some 50–60 per cent since the Apollo days, the core technology behind the space industry has simply gone through multiple derivative iterations of von Braun’s initial work on the V-2 rocket of World War II. Gradual improvements have been made over and over again until we got the Saturn V at 2.966 million kg that could fly 3 astronauts 380,000 km to the moon.  This process of iterative design or engineering is known generally as “design by analogy”.

Design by analogy works on the philosophy that as engineering capabilities and knowledge improve, engineers find better ways to iterate on a base design, perhaps finding technical solutions to previous limitations or new materials which improve efficiency or the manufacturing process. But design by analogy creates limitations in engineering thinking, because you’re starting with a template—the work is derivative. To create something truly revolutionary you have to be prepared to start from scratch.

After his successful exit from PayPal, Elon Musk created three major new businesses: Tesla, SpaceX and Solar City. Instrumental in Musk’s approach to each of these businesses was his belief in the engineering and design concept called first principles. Unlike design-by-analogy or derivative design, first principles take problems back to the constitute components, right back to the physics of the design—what the design was intended to do. But his biggest goal was getting mankind to Mars – an “insurance policy” for humanity as he calls it.

Another great example of first principles design is the motor vehicle. At the time that Carl Benz invented the first two-seater lightweight gasoline car in 1885, everyone else was trying to optimize carriage design for use with horses. Benz took the fundamentals of transport and applied the capabilities of the combustion engine to create something new.

In 1895 in the Times of London there was much debate over the future of the horse and carriage industry. Cities like London and New York were overrun with horses and the subsequent signs of their habitation. The Times estimated if the transportation industry in London continued to grow unabated, by 1950 the city would be covered in 9 feet of horse manure. When the automobile arrived, it was seen as a threat to the humble horse and cart. Initial laws required a human to walk in front of the automobile waving a red flag, so it didn’t scare the horses. But things changed rapidly.

In 20 years, the streets of New York had gone from being dominated by horses to being dominated by the Model T Ford. Drug stores were now selling gasoline or fuel. Road laws were being put in place. Drivers didn’t yet require a license or seat belts, but those would come also. Parking lots started to appear and roads were soon being paved because dirt roads created wear and tear on vehicles. First principles had radically changed transportation

I think it’s important to reason from first principles rather than by analogy. The normal way we conduct our lives is we reason by analogy. [With analogy] we are doing this because it’s like something else that was done, or it is like what other people are doing. [With first principles] you boil things down to the most fundamental truths…and then reason up from there.
—Elon Musk, YouTube video, First Principles

To get to Mars, Musk has reckoned that we need to reduce the cost to orbit by a factor of 10. A tall order for NASA, a seemingly impossible task for a software engineer who had never built a rocket before. As noted in Musk’s recent biography (Vance, 2015), Musk has the unique ability to learn new skills to an extremely high level of proficiency in very short time frames. Thus, when it came to rocket design, he simply taught himself—not just the engineering of pressure vessels, rocket engine chambers and avionics, but the physics behind every aspect of rocketry—and even the chemistry involved. Musk reasoned, if he was to start from scratch based upon the computing capability, engineering techniques, materials sciences and improved physics understanding we have today, would we build rockets the same way we had for the last 50 years? The answer was clearly no.

In 2010 NASA was paying roughly $380 million per launch. SpaceX currently advertises a $65 million launch cost. SpaceX’s current cost per kilogram of cargo to low-earth orbit of $2,300 is well below the $14,000–39,000 per kilogram launch cost of United Launch Alliance, the lowest priced direct competitor for SpaceX in the United States. 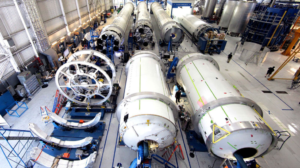 The last major manned space program of the US, the space shuttle program, averaged a cost-per-kilo to orbit of $18,000. Now that SpaceX has figured out how to land their first stage vehicles back on land and on their oceangoing drones(JUST READ THE INSTRUCTIONS and VANDENBERG OF COURSE I STILL LOVE YOU) the reusability factor has reduced their cost per kilo to orbit of their Falcon Heavy launch vehicle down to around $300-600. With the successful launch of the Falcon Heavy in 2018, SpaceX has effectively reduced the cost to orbit by at least 90 per cent in the 14 short years of their commercial operations.The biggest benefit of first principles thinking, however, led Musk to an epiphany that will allow SpaceX a unique platform for reaching Mars with their rocket platform.

One morning in the shower at home, Musk had an epiphany. CO2 is abundant on Mars, and if you have CO2 you can make CH4, or methane. With methane rockets, Musk could have a specific impulse (SI) of 382—a small, but significant improvement on the current LOX based engines. More SI, means lower cost to orbit and/or greater range. But the other advantage is that liquid methane would only require passive cooling for storage on Mars, instead of the cryonics that you need to cool oxygen to its liquid state (-218 °C) for conventional rocket engines today.

By building rocket engines that can use CH4 Musk changed the rules in terms of viability for a return trip to Mars. A 94 per cent cost to orbit reduction, reusability with rockets that land themselves, and a fuel source that is easily manufactured and stored on Mars.

Welcome to the revolutionary benefits of first principles design.

Musk isn’t the only one to believe in the philosophy of first principles design. Steve Jobs was reportedly a believer in getting back to basics for redesigning well-worn concepts. Instead of iterating on the famous Motorola flip phone, the Palm Pilot, or the Nokia “Banana” phone, Jobs started from scratch in reimagining a phone, browser and iPod combined into a personal ‘smart’ device.

There’s the great story about how Steve carried a block of wood around the office while the team was creating the iPhone. He wanted to remind everyone around him that things should be simple. Jobs understood that technology is only as powerful as the ability for real people to use it. And it’s simple, usable functionality—not ridiculous over engineering—that makes for technological power.
—Bill Wise, MediaBank, quoted in Business Insider, 12th October 2011

Jobs and Jony Ive didn’t try to iterate on an existing mobile phone design and improve on it, they started from scratch. It’s why the iPhone ended up with a revolutionary touch screen design, aluminum housing, no keyboard and an app ecosystem. Do you remember the debate when the iPhone launched over the value of the Blackberry RIM keyboard versus Apple’s lower accuracy touch screen keyboard? Many commentators were sure the Blackberry keyboard would win out. But it didn’t.

If you’re in a business or industry that has not fundamentally changed in decades, or centuries (like banking), the chances that first principles thinking will come along and revolutionize your industry are very strong. When it does so, you’re left with no competitive leverage because the rules have changed.

In 1994 Nokia launched the 2100 handset, the first to feature the iconic Nokia ringtone. They targeted sales of 400,000 units that year but sold 20 million instead. In 2005 Nokia sells its billionth phone, the same year global phone subscriptions pass 2 billion. Between 1996-2001 Nokia’s turnover went from €6.5 Billion to €31 Billion. Then the iPhone appeared. It changed everything

Today every smartphone looks and functions like an iPhone. The app ecosystem defined the way we think about software on smartphones, and you can’t have a business today that doesn’t have an iPhone app. That all happened because of first principles thinking. Not an iteration on the existing phones of Nokia.